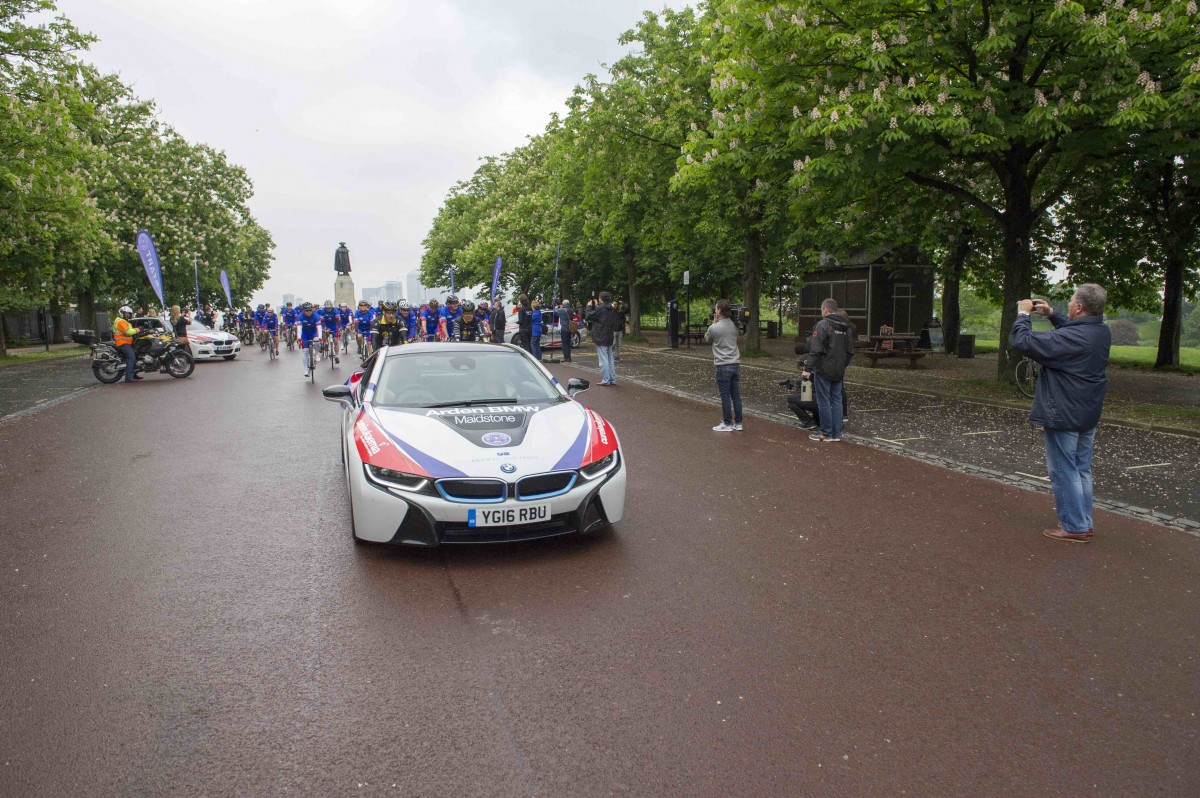 So the day that I've been training for over the last 14 weeks had finally arrived. The team all met at Pizza Express last night for a pre-event dinner before an early start in Greenwich Park at 7am for registration, a photo call and final bike checks before starting the 127k ride to Folkestone. With a slight time pressure in the back of mind, I didn't want to miss the Euro Shuttle and some inspirational words from Geoff Thomas reminding us that not only was this a fun event we were also raising much needed funds for Cure Leukaemia we heard off through Greenwich! 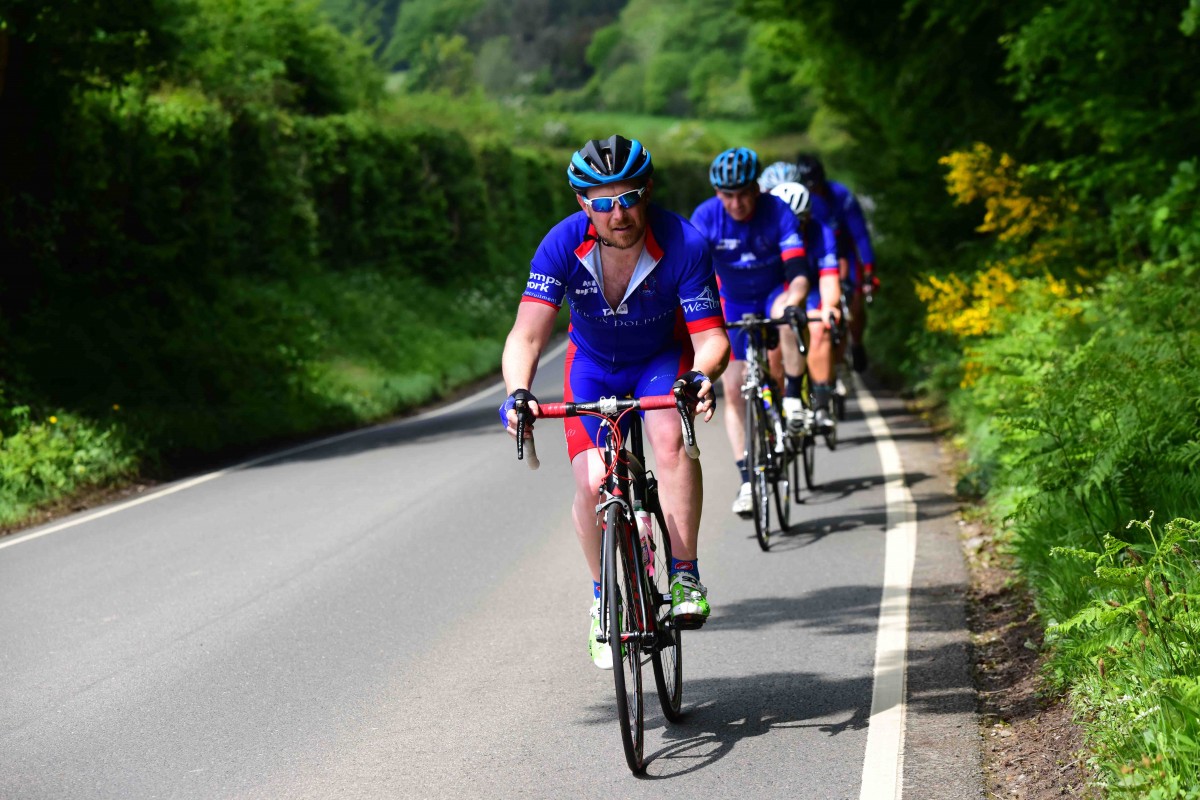 After 6.5hrs of cycling a couple of stops for much needed food and one monster hill climb at the end of the day we boarded our coaches and headed to a hotel for some well earn rest before an early start tomorrow for day 2.

The day started overcast and with a little more wind than you'd want on a cycling day and the first 50k of the day was tough going. Having made it through to the lunch break and some much needed food and a short rest the group headed off for the next 50k. 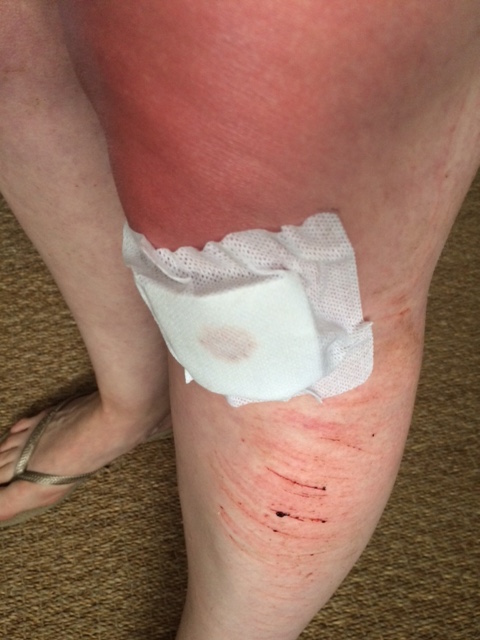 A timed hill climb out of the village we'd stopped in for lunch and we were back on the road again and then a left turn onto gravel and thump!
I'd come of my bike, the next I remember is the medic helping me up and my bike being loaded into the van. It was certainly a shock and next 30k or so was spent sat in the van feeling a little sorry for myself.

We made one last stop of the day before the whole group come together to ride into Abbeville and the stop for the second night. Sporting a plaster on my knee and a few grazes (thankfully nothing more serious) I was determined to cycle the last 15k of the day with the group and pleased that I was able to get back on my bike at this point the sun had also come out making a great ride into town with everyone riding together! 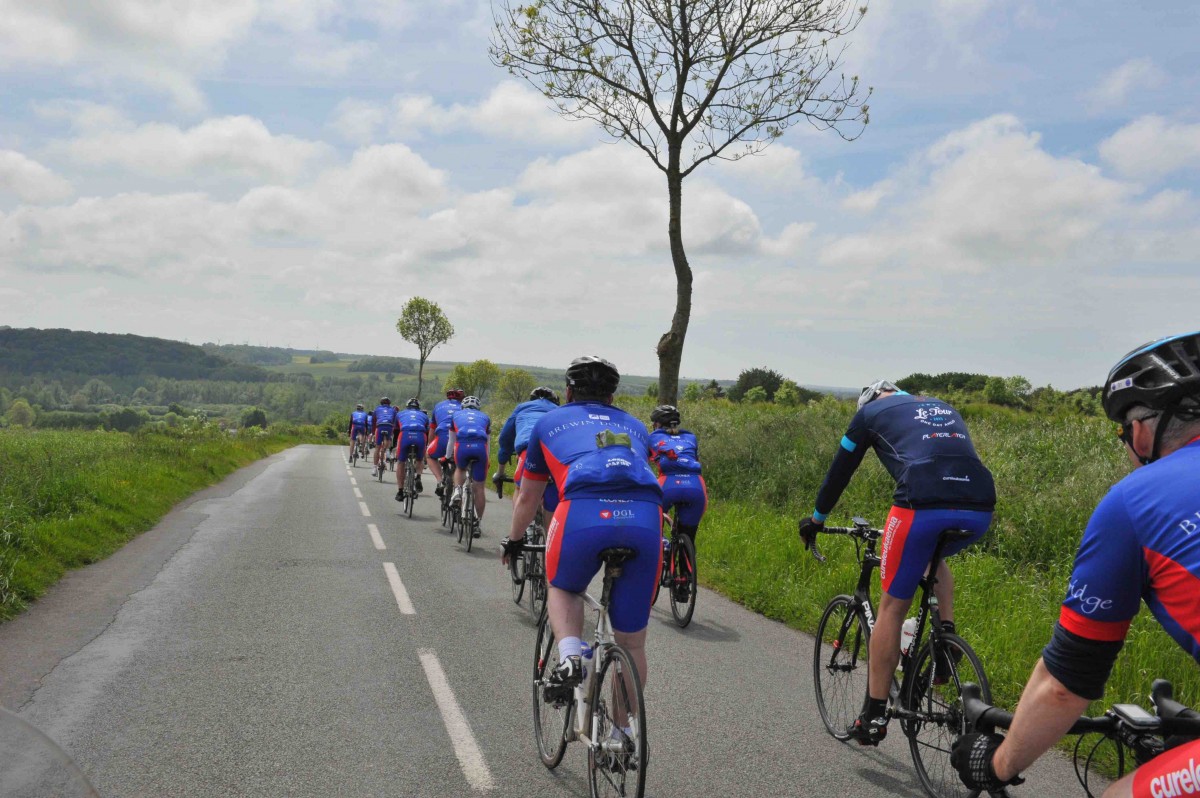 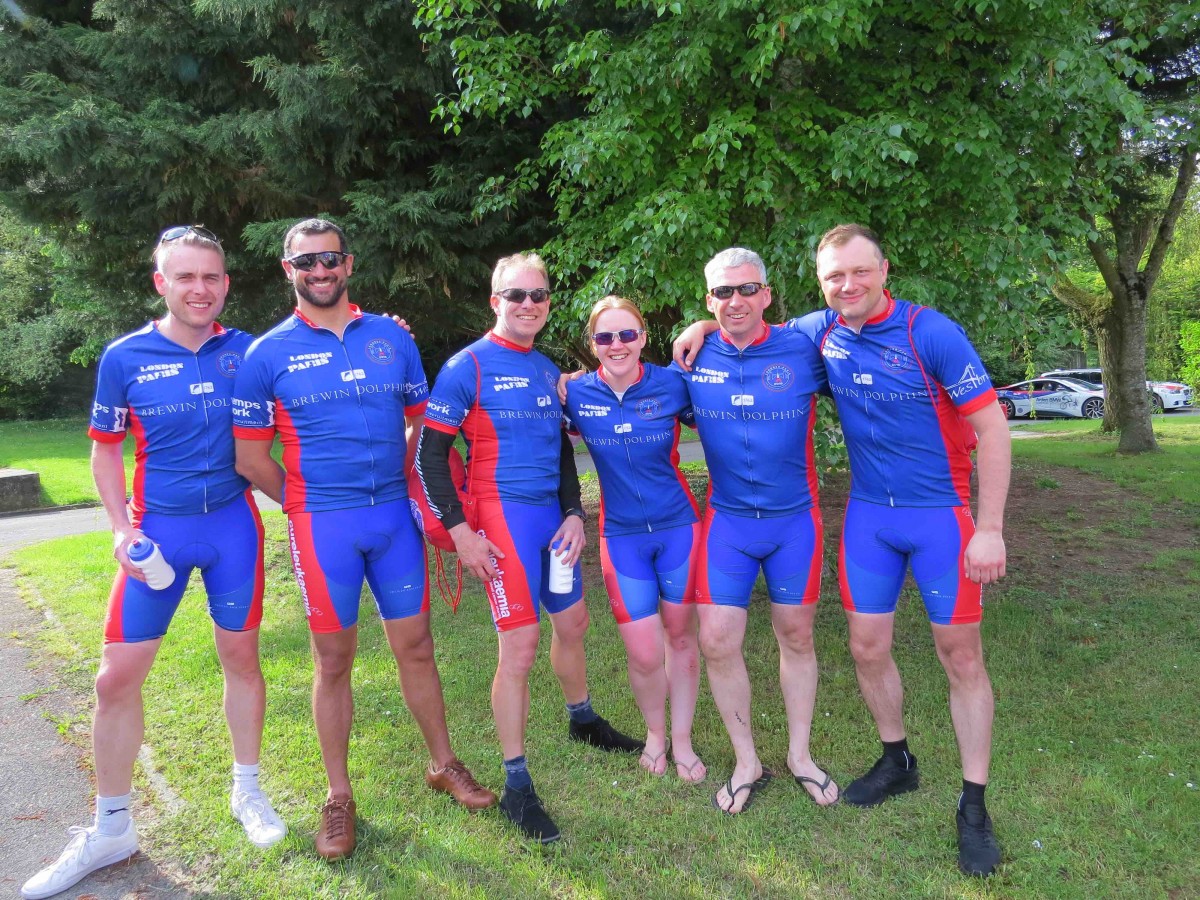 The weather conditions were much better for cycling this morning and after yesterday's fall and with a good night's sleep behind me I was keen to get going for day 3.

After collecting our bikes the social group headed out first to start the 50k of the day before we'd stop for lunch. Everything was going well the route was considerably flatter than the previous two days, still with some slight hill climbing but certain nothing like days 1 & 2, a timed 10k run was also included and all was going well until we turn off onto a more country style road and the terrain become more gravelly. With some much needed help from the lead riders who are supporting us throughout the ride, I made it down the first hill and up the next although thought of yesterday's fall on the gravel surface were popping in to my mind and I could feel my confidence fading fast. At this point we were no more than 5k from lunch and even this thought couldn't keep me going and I stopped, my confidence gone I climbed into the van to join the team at the first stop of the day. 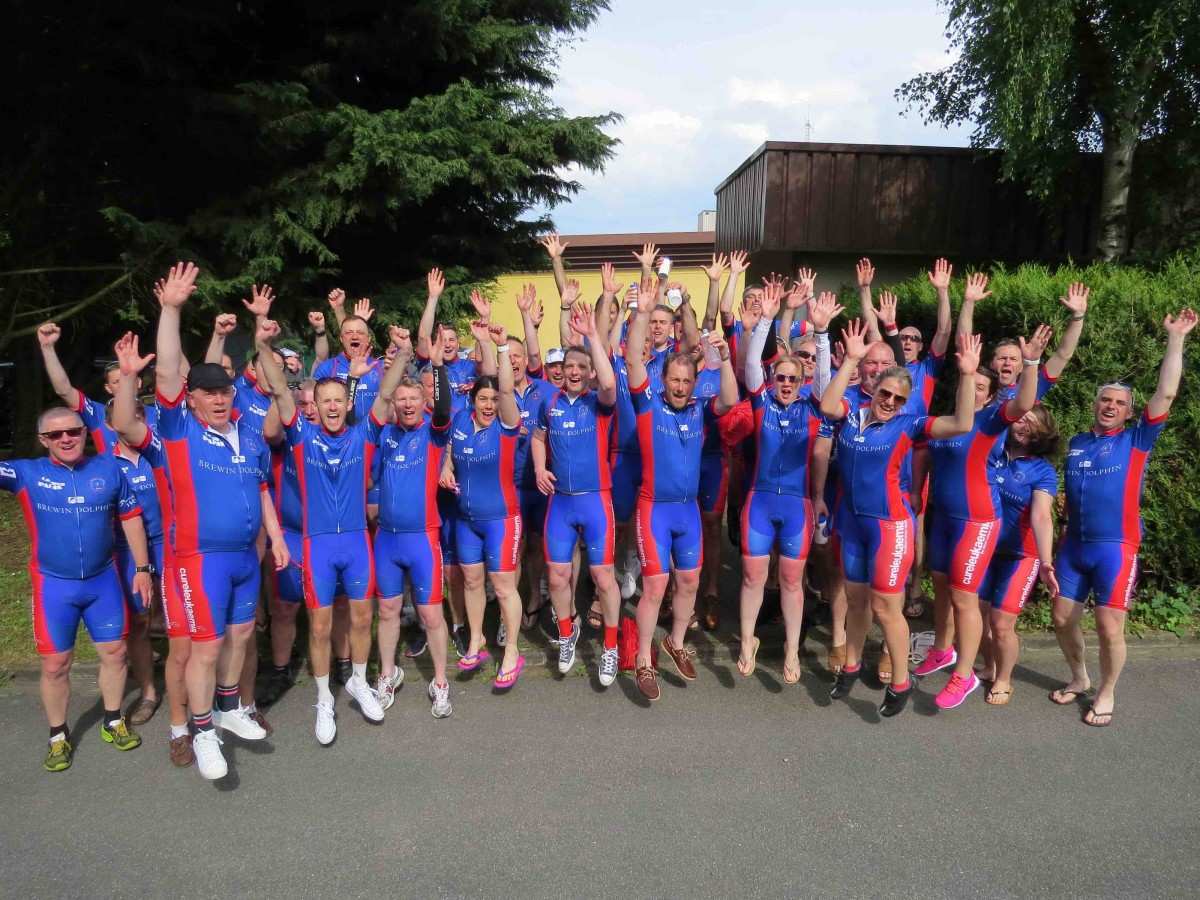 After the stop I wanted to get back on my bike to complete the day's riding and after taking a moment or two and with some kind words of encouragement from some of the other riders, I climbed back on to my bike to start the next part of the day. Slowly as the km's ticked over my confidence come back and I was happily riding again until we turned left into the next stop of the day at which point I took the corner completely at the wrong angle and landed to the right in the verge! Having managed to find myself fairly near the front of the group I waved the other riders in laughing from the floor.

The final push into Beauvais went smoothly I'm pleased to say and we were met with a glass of bubbles at the end and some kind words from the town's Mayor who saw us ready for the final day's ride into Paris on day 4. 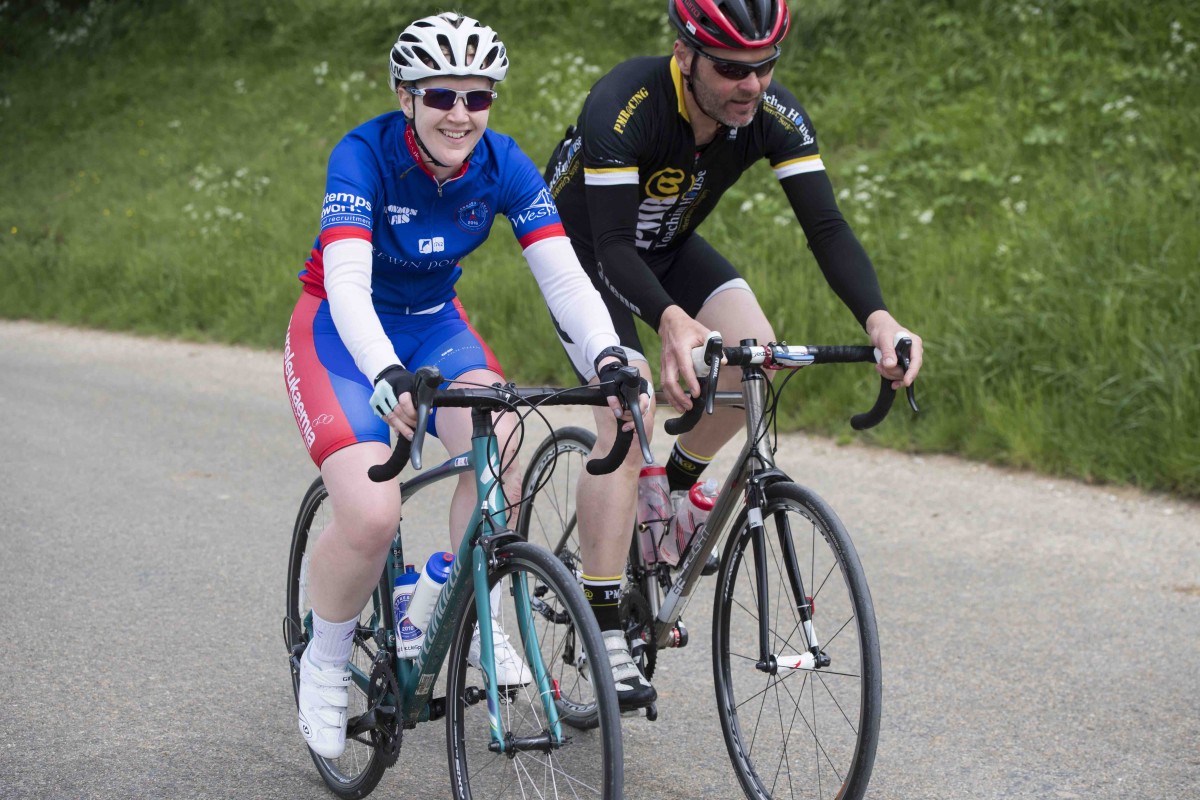 The final 100km in to Paris were here and the weather was miserable. The rain didn't look as if it was going to clear at all as we headed off in coaches to the start line. I was really feeling drained today in every way physically and emotionally and the thought of getting on the bike was not motivating me at all. After a run through of this year parody video song Fleur East 'Sax' I found the strength from somewhere to get out on the bike and ride out cheered by the other two speed groups with the social group. The first 10km were tough and I struggled to stay with the group even with help from the ride leaders and then I stopped and climbed into the van were it all caught up with me and I slept the rest of the way through to lunch. 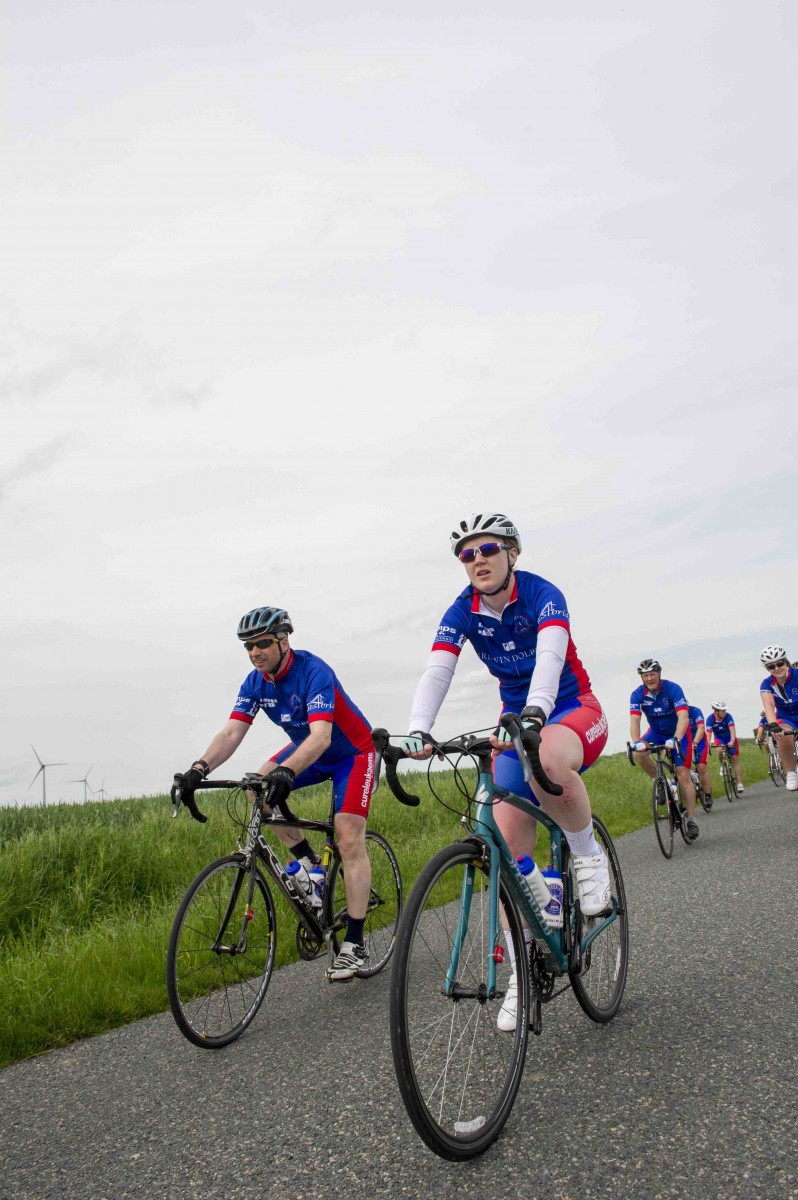 After the lunch and with the rain seeming to be getting heavier we headed of for the final 50km into Paris were I rejoined the group for the approach up to the Arc De Triomphe and round to the finish line were soaked through we were handed our medals and then boarded coaches to the hotel and well earned celebration dinner.

Although disheartened slightly that I'd not completed the full distant on my bike I'm proud of what I have achieved and the experience of the last 14 weeks has taught me how much you can achieve if you put your mind to it and also how much having a good team around you can get through any thing. Everyone from the riders to the support crews have been great and the atmosphere throughout the event was so positive. Of course we've raised an amazing amount for Cure Leukaemia which you know will be invaluable to the work that Professor Charlie Craddock CBE and the team do in fighting blood cancer.

A final word, although it maybe a few days/weeks before I get back out on the bike again I know that I will be getting out on it soon and would even consider signing up for L2P again next year!