Why caboodle are riding L2P 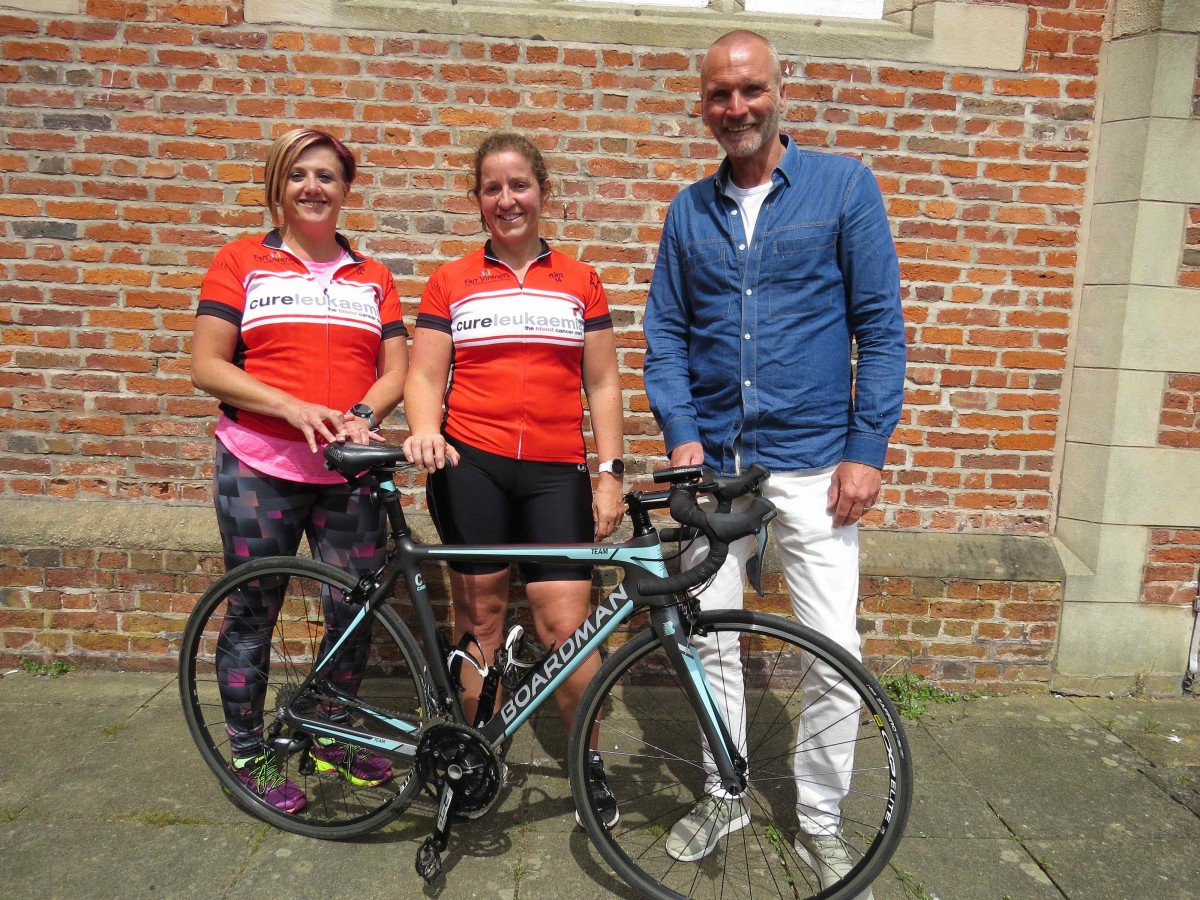 Cure Leukaemia is our corporate charity this year.  We have 4 members of staff who have been directly affected by leukaemia.  The speed and which this terrible cancer can take hold is scary and having witnessed the devastation it causes to families I would like to do all I can to raise funds for research and pioneering new drugs which can help save lives.

I am not an experienced cyclist having only started cycling 18 months ago.  I completed the Birmingham Velo last year and thought the London2Paris ride looked like an exciting personal challenge and clearly supports a charity which I am keen to raise funds for.

My training has been hampered as I fell off my horse at the beginning of July injuring my knee.  I have since had surgery to repair my cruciate ligament which had become completely detached.
Since the operation, my training has been limited to my turbo trainer, but I’m determined to be fit enough to complete the ride!

Prior to my operation I’d been training with my colleague Anne and we’d completed a few rides together. 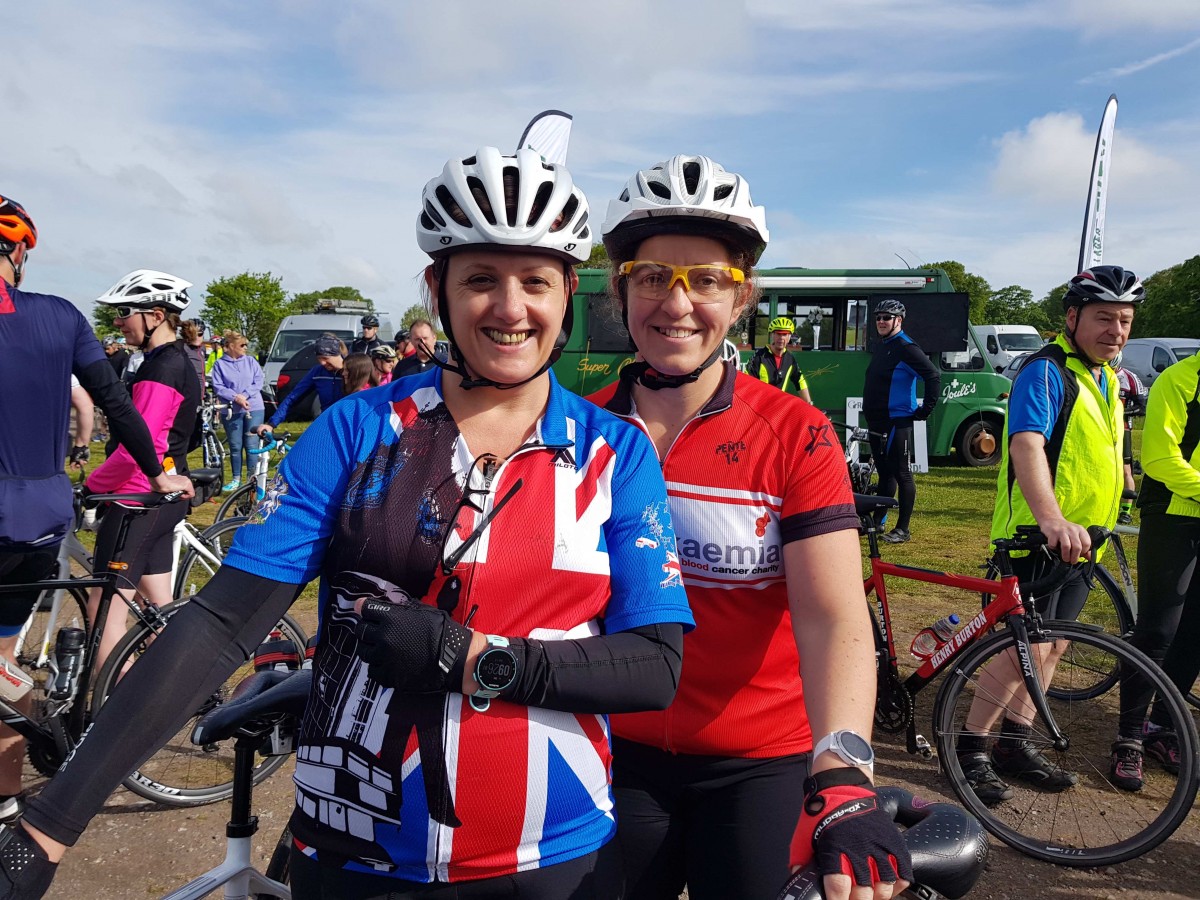 In April 2016 my mum in law Sue was diagnosed with CML – this was purely by chance as she went to see an optician about ‘floaty bits’ in her eye. Since then, Sue has been on various tablets and injections and has remained positive throughout.

Fuelled by Sue’s positive attitude, I decided I wanted to do something for her and all the others whose lives are hindered by this horrible disease, so entered the Birmingham Velo in 2017. Unfortunately, I was ill so could not take part with my colleagues Catherine and Dave and my husband Simon, but I did complete my own century ride a few weeks later!

I’ve got the cycling bug and Simon and I have continued with the sport, so when Catherine suggested we take part in London2Paris for Cure Leukaemia, I jumped at the chance and have been training with both Catherine and Simon since the spring.

It hasn’t all been plain sailing though as I came off my bike in mid-July, suffering what can only be described as a gruesome gash to my knee which resulted in minor surgery and nearly 5 weeks off the bike! I’m now back in the saddle (although at a slower pace) and I’m determined to complete London2Paris with Catherine, and now also my husband who won a place on the trip with CL.

For those supporting family and friends affected by Leukaemia, it is often hard to feel useful, so this is my way of doing something positive to help develop new treatments and support services that can benefit so many people.

Why caboodle are supporting Cure Leukaemia

The staff at caboodle are close nit team and have been working together this year to help raise money for Cure Leukaemia because 4 colleagues have been directly affected by the disease. The 4 team members have shared their stories with us:

20 years ago, Dave’s first wife, Sally was diagnosed in her early forties and fought for 2 years before she sadly passed away, leaving Dave and their 2 young children.

Dave has been an avid supporter of Cure Leukaemia over the years and in 2016 he completed the London to Paris cycle event and the Birmingham Velo in 2017 alongside friends and leukaemia survivors, to help raise money.

Anne’s mum-in-law Sue, was diagnosed nearly 2 years ago at the age of 65. She’s had some setbacks along the way as none of the chemotherapy drugs have worked very well. She’s now on a different chemo drugs which seem to be working.

As a keen cyclist, Anne trained hard for the Birmingham Velo last year but was unwell on the morning of the event – so instead cycled the equivalent distance once she was fully recovered. She’s taking part in the London2Paris cycle event along with her husband Simon.

Adele’s husband, Kevin, was diagnosed with Acute Myloid Leukaemia (AML) in November 2017 at the age of 55. Kevin has undergone 4 rounds of intensive chemotherapy over and is currently in remission. He’s waiting the results of his sixth bone marrow biopsy to ascertain if further treatment and a stem cell transplant will be needed.

Using her communications skills, Adele has been actively supporting leukaemia charities in raising awareness of the symptoms by being proactive on social media and distributing awareness material to local GP surgeries.

Gareth’s grandad, Alan was diagnosed with Myeloma in 2012 at the age of 68. He underwent chemotherapy treatment in 2012, followed by a stem cell transplant in 2013, and since then has been in remission. He’s now fit and well, enjoying his retirement keeping active and walking with his wife Rose.

Also passionate about raising awareness, Gareth is very proactive on social media and has managed several successful fundraising events so far this year in aid of Cure Leukaemia.